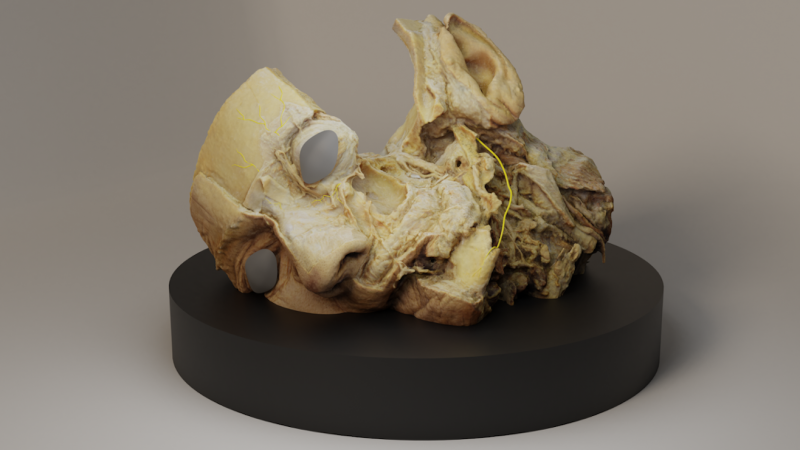 The render of the 3D model shows parts of the Trigeminal nerve in the face. Specifically it shows the opthalmic, maxillary and mandibular divisions. The mandibular nerve lies within the mandible, which was in this case removed and therefore would be invisible even if the mandible was there. The disected specimen used in education undergo damage after being used and some fine tissues, such as the nerves, get damaged or are difficult to see as a result of the conservation process (brown/cream colour simillar to muscles). This specific specimen was dissected in a way where the Trigeminal nerve of the face can be studied, however, the original organic tissue was damaged so more visible (yellow) nerve structure was added into the digitalised version. The altered 3D model of a human disected specimen is supposed to aid in medical and anatomical education.

Background Information
This image is a render created in Blender, using the cycles rendering engine. At first, a photogrammetry of the head was done at the Department of Anatomy using a hand-held Nikon 5D camera and a rotating table. These photos were put into the open-source photogrammetry software, Alicevision Meshroom, which stitched together the 180 photos and created a point cloud, which yielded a 3D model. The mesh and the textures were exported into 3D Blender modeling software, where the nerves were added (using Bezier curves) onto the realistic 3D model of an anatomical head. The nerves were created based on medical illustrations in textbooks and a critique from an anatomy expert. The photogrammetry was aimed at digitising a specimen whose quality and visibility of desired structures is decreasing as a result of hand-handling by students. The 3D modelled nerves, which are the desirted structures, are visibly added in post-processing but show where the structures lie within the face and where the students should look for them in other cadavers and in live people. The image was submitted to the VCBM Image Contest because it shows a potential educational tool which combines digitalised real-life cadaver and adds structure that is missing from the said cadaver. 3D models, such as the one presented here are mean to be used in medical and anatomy education. It creates an effective visualisation by combining human anatomy, education, and technology. Before submitting this render to the VCBM Image Contest, an approval was acquired from the Anatomy Department. The condition to anonymise the model was met by blocking out the eyes of the specimen.